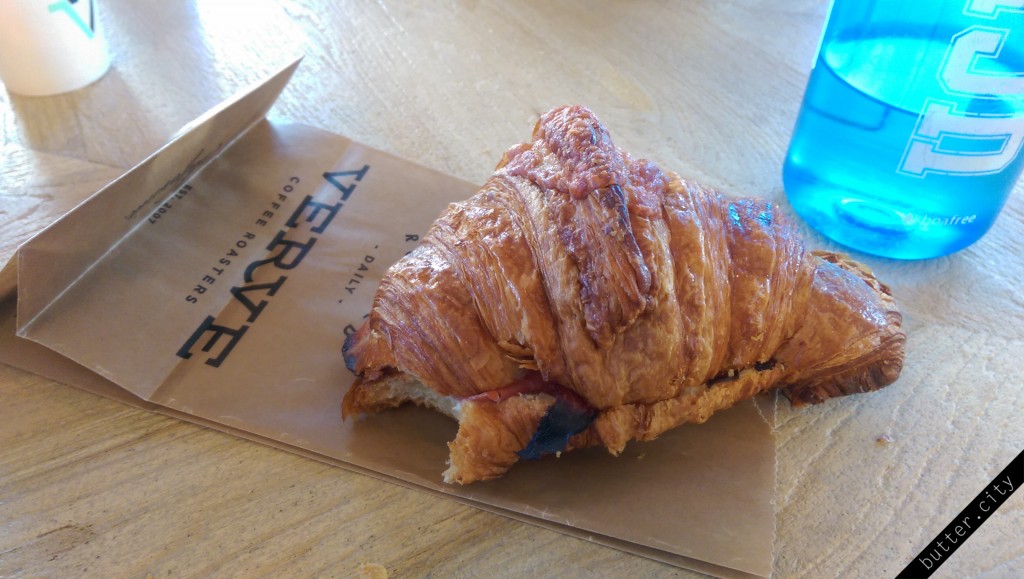 Verve coffee just opened up next to Santa Cruz Yoga, so of course we went to scope out their baked goods selection on our weekend there.

First things first, selection is small, and they only have things from Mary’s Cookies in Santa Cruz and Manresa Bread in Los Altos. I overheard some raving about the cookies, so I did some digging and read that Mary’s Cookies is just a grandma in her house, baking cookies and selling them to literally only Verve. The cookies are big, thick, and full of stuff – this weekend they had s’mores, chocolate chip, and caramel pretzel. I picked up chocolate chip and caramel pretzel, since s’mores was the same a chocolate chip cookie with a marshmallow on it. Both cookies were a bit on the dry side, but I liked the chewy texture of the caramel mixed in to the cookie base of the caramel pretzel. Plus the mini pretzels themselves added a fun texture to the cookie.

But the star of my haul was the ham and cheese croissant from Manresa. I actually haven’t gotten any pastries from Manresa bread in Los Altos yet (now up on my list of priorities) but woowooww this croissant was one of the best I’ve ever had. Buttery, moist, crispy on the outside. They also put a thin slice of cheese on top of the croissant before baking so there’s a great frico flavor as well. Oh, also the croissant was huge.

Alas, two cookies and a croissant set me back $14 – with each cookie being $4.50 and the croissant $5. Not cheap, but a great treat if you’re in the area and need a pick me up.

Oh, I guess I should mention about coffee – I picked up a cold brew coffee later in the day, and it was not the best I’ve ever had. It was definitely a bit on the sour side, which I guess is attributed to their roasting technique rather than brewing. Nitro cold brew was $1 more at $4.50, so I passed on that.